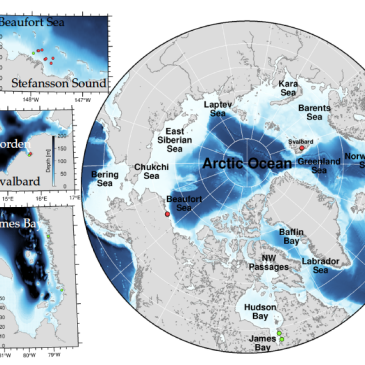 In this study, a PAR (photosynthetically available radiation) algorithm based on radiative transfer in the atmosphere and satellite observations is implemented in the coastal Arctic Ocean.

Abstract: Climate change has affected the Arctic Ocean (AO) and its marginal seas significantly. The reduction of sea ice in the Arctic region has altered the magnitude of photosynthetically available radiation (PAR) entering the water column, impacting primary productivity. Increasing cloudiness in the atmosphere and rising turbidity in the coastal waters of the Arctic region are considered as the major factors that counteract the effect of reduced sea ice on underwater PAR. Additionally, extreme solar zenith angles and sea-ice cover in the AO increase the complexity of retrieving PAR. In this study, a PAR algorithm based on radiative transfer in the atmosphere and satellite observations is implemented to evaluate the effect of these factors on PAR in the coastal AO. To improve the performance of the algorithm, a flag is defined to identify pixels containing open-water, sea-ice or cloud. The use of flag enabled selective application of algorithms to compute the input parameters for the PAR algorithm. The PAR algorithm is validated using in situ measurements from various coastal sites in the Arctic and sub-Arctic seas. The algorithm estimated daily integrated PAR above the sea surface with an uncertainty of 19% in summer. The uncertainty increased to 24% when the algorithm was applied year-round. The PAR values at the seafloor were estimated with an uncertainty of 76%, with 36% of the samples under sea ice and/or cloud cover. The robust performance of the PAR algorithm in the pan-Arctic region throughout the year will help to effectively study the temporal and spatial variability of PAR in the Arctic coastal waters. The calculated PAR data are used to quantify the changing trend in PAR at the seafloor in the coastal AO with depth < 100 m using MODIS-Aqua data from 2003 to 2020. The general trends calculated using the pixels with average PAR > 0.415 mol m-2day-1 at the seafloor during summer indicate that the annual average of PAR entering the water column in the coastal AO between 2003 and 2020 increased by 23%. Concurrently, due to increased turbidity, the attenuation in the water column increased by 22%. The surge in incident PAR in the water column due to retreating sea ice first led to increased PAR observed at the seafloor (around 12% between 2003 and 2014). However, in the last decade, the rapid increase in light attenuation of the water column has restricted the increase in average annual PAR reaching the bottom in the coastal AO.